skip to main | skip to sidebar

I have been posting more over at my new Tumblr (sorry it's ugly, I'll work on it), which reminds me a lot of the good ole days on Livejournal in a cozy, and also weird, way.

I've also posted links to all my Bachelorette poems for easier reference.

Thanks for reading!
Posted by Leigh Stein at 1:39 PM 1 comment:

Dispatch from the Future 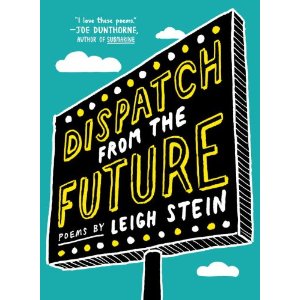 Publishers Weekly calls Dispatch "a mix both giddy and anguished"


Guernica says, "Leigh Stein's new collection is captivating even for the most ardent of poetry-haters."


Tottenville Review says, "Dispatch from the Future is an archaeological dig by a woman who is commenting on her life as she is uncovering it, acknowledging and then abandoning the poetic female legacy of Eurydice always getting left behind."


I was interviewed for Girls Like Giants about my enemies


The New York Observer calls me "The Accidental Memoirist"


You can find a copy at your local independent bookstore by clicking here
Posted by Leigh Stein at 9:16 AM No comments: 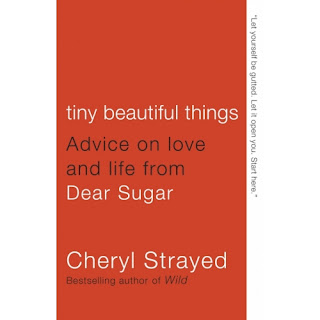 I've spent the past few days hunched—on the subway, in my apartment, in cafes—reading Cheryl Strayed's Tiny Beautiful Things: Advice on life and love from cover to cover. As Steve Almond writes in the introduction, Dear Sugar offers something that's "almost unheard of in our culture: radical empathy." As you read her advice to the heartbroken, the grief-stricken, the conflicted, you feel like she gets it. She isn't faking it. She is looking you in the eye.

Sugar's advice is radical, because it comes from the heart, and is never corny or patronizing or dripping with clichés, like "Hang in there," or, "The end is in sight," or, "I wouldn't worry so much about it."

How does she do it? And why does reading these letters make me cry?

1. She acknowledges the pain of the advice seeker.


This is something I also try to do with the young children I teach, after reading a book called How to Talk So Kids Will Listen & Listen So Kids Will Talk. The authors talk about the danger of denying feelings, when we say things like "You're just saying that because you're tired," or "There's no reason to be so upset." They write, "Steady denial of feelings can confuse and enrage kids. Also teaches them not to know what their feelings are—not to trust them."

If you've ever spent time with five- or six- or seven-year-olds, you've seen a lot of tears. I've also seen a lot of yelling at kids (especially boys) to shut up, stop crying, get over it. But when you look at their faces, you know they aren't faking it. They're wailing because, in that moment, their worlds are actually crumbling.

Sugar says, "I can feel your suffering vibrating right through my computer screen." She says, "I'm sorry for your pain."

2. She goes back to their own words.


Therapists do this, too. They're "close readers" of what's actually being said. She reads their letters back to them, and shows the answers hiding there all along.

3. She uses story as symbol.


In "Reach," she answers the letter of a man addicted to pain medication in the conservative "Deep South" at the end of his rope. She provides some practical advice, and then tells the story of a time when she was living with her husband in a crappy apartment in Brooklyn. They heard strange scratching sounds in the walls for weeks that they couldn't locate or define. On New Year's Day, there was finally a definite howling, and her husband clawed at the ceiling of their closet until two starved kittens emerged.

"I've tried to write about this experience several times over the years....[but] I never found a way to write about it until I wrote this letter to you, Ruler, when I realized it was a story you needed to hear. Not how the kittens suffered during those weeks they were wandering inside the dark building with no way out—though surely there's something there too—but how they saved themselves. How frightened those kittens were, and yet how they persisted. How when two strangers offered up their palms, they stepped in."
Posted by Leigh Stein at 11:32 AM No comments:

We're in Croatia.
Croatia is the perfect place
to fall in love.

I'm really bummed out
Travis didn't take his shirt
off. I'm ready to bust out

of the friend zone.
Love takes bravery,
so wearing a kilt

on this date is just one
of those brave things
that I have to do.

There's definitely an edge
to me. In Croatia, it's customary
for men to ride donkeys into battle.

Emily, will you accept all these roses?
I see myself as an absolute front-runner.
I'm in the middle of Croatia wearing a skirt.
Posted by Leigh Stein at 12:59 PM No comments:

I know I sound like I'm on my death bed, but
I don't want them to think that I'm not having fun.

Good girls are hard to come by.
Isn't that cool?

I want a guy that doesn't take himself too seriously.
I, myself, am taking this very seriously.

Please enjoy your short imprisonment.
You kind of learn what they're into and

then maybe you'll get into it.
The good part is: you kiss his lips

and some poison is left to kill your own self.
May the best Romeo win.

I think loving someone is giving yourself completely
to them, giving them an eternal kind of love.

I really like my kisses with Sean.
Sean is totally my prisoner of love tonight.

It's all or nothing: that's kind of the theme of this
whole endeavor. Fuck my life, man.

I want something that lasts forever
and that I'm so sure of.
Posted by Leigh Stein at 1:04 PM No comments:

I wrote another book

On July 24th, my collection of poems, Dispatch from the Future, will be released from Melville House Press. The Rumpus chose it for their Poetry Book Club, and Publishers Weekly selected it for their "Best Summer Books of 2012." 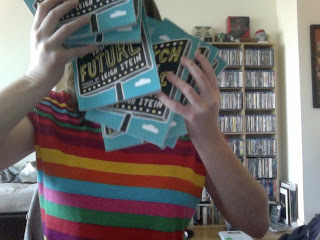 The best sales pitch I have thought of is: Do you hate poetry? Buy my book.

Many people over the years have told me that they hate poetry, but like my poetry, and this is one of my favorite compliments to get. I don't like stuffy, pretentious, humorless poetry either, but so often, that's what people think of when they think of poetry. It can be a dirty word. But poems don't have to be inside jokes among you and everyone in your MFA program. They can be real jokes, or they can be narrative, or they can be dialogue, or they can be dark & moving. Poems can be everything you love about reality TV, Twitter, and road trips, as well as love and heartbreak and loss. I want a real smorgasbord of life in my poems, don't you?

That being said, here are some ideas on how to get and support my book:

* If you're in New York, you're invited to my launch party on July 19

* You can pre-order a copy from your fave independent bookstore

* If you have no money or time, you can always add my book on Goodreads, which helps in my campaign to appear more popular than I actually am
Posted by Leigh Stein at 3:19 PM No comments:

Let's get down to the real stuff
and not the bromance.

God designed you
to be a beautiful woman,

so be a beautiful woman.
This is my first time on a sailboat

and I didn't know there was so much work
involved. Who knew Bermuda had all this going on?

Let's be real. I would have given my right leg
to pop champagne and spend the night

with Emily. She's been given a great responsibility,
and I want to see her do something good with it.

The Bermuda Triangle: we're here.
Eat yer heart out.
Posted by Leigh Stein at 11:42 AM 1 comment:

Leigh Stein
is the author of the novel THE FALLBACK PLAN and a book of poems, DISPATCH FROM THE FUTURE.

The Book Report at the Gallery at LPR - August 14
Manhattan 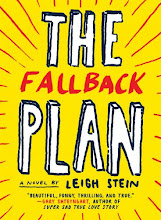 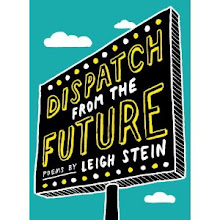